Portraits of the pioneers

Most of the pioneers came within the 19th century and from a country called ‘Nassau’. Nassau was right in the heart of Germany. The capital was Wiesbaden between 1700 and 1866. Wiesbaden is located near Frankfurt and not far away from the river Rhine. The county was occupied by Prussia in 1866 and the name Nassau has gone. Today the territory of the former Nassau lies mainly in the States of Hesse and partly also in Rhineland-Palladium.

Within Nassau most emigrants came from an area called the ‘Taunus’ which is celtic and means ‘the height’. The area was not very rich because the villages lie in heights between 300 and 500 meters above sea level and the ground is stony and not very fruity. All of the Taunus-Bremsers were Lutheran.

Another area of Nassau was the ‘Rhinegau’ which belonged to the archbishop of Mainz until 1803. Mainz and the Rhinegau both lie at the river Rhine and at about 100 meters above sea level. People there still were usually Catholics during the 19th century, had a little better life and therefore emigrated less often.

The roots of the Bremser family are in Ruedesheim in the Rhinegau. A castle called the ‘Broemserburg’ located in Ruedesheim is named after the noble family of the „Broemser von Ruedesheim“ In the early 16th century there was a non noble branch of that family created and since around 1560 there are members of the Bremser family living in the county side called the Taunus, and in particular in the small villages that lie near the road between Wiesbaden and Bad Ems, like for example Niedertiefenbach.

The name Heinrich (Henry) was very common in Nassau during the 19th century.

Pioneers with year of immigration:

Philipp Heinrich Adam Bremser, born 29 Nov 1825 in Niedertiefenbach, Germany as the son of Johann Daniel Bremser (1788 – 1847) and Anna Elisabeth Maus (+ before Feb 1830) had 4 brothers and 1 sister. He was the youngest child. His oldest brother Johann Heinrich Bremser married in 1841 Maria Catharina Haxel from Singhofen and lived there until his death. A 2nd brother Heinrich Adam Bremser (1817 – 1892) remained in Niedertiefenbach with his family. There was a big Bremser clan living in Niedertiefenbach, since Johann Justus Bremser (1672 – 1727) from Zorn, the great great grandfather of Johann Daniel Bremser, had married to Niedertiefenbach. Philipp Heinrich Bremser was not yet 22 years old when his father died in 1847and because his mother already had died soon after his birth he did not have any parents any more. Short after the death of his father he decided to emigrate. The further information is taken out of a letter that he wrote from Louisville, Kentucky to his brother in Singhofen the 13th of January 1850:

He had sailed from Antwerp towards the USA starting the 2nd Oct 1849. His friend Römer got sick during the 1st day and had to get off the ship. They said it was the Cholera. The 12th of November they arrived at Long Island. Then they sailed around Cuba and Florida and arrived at the Mississippi delta the 24th of Nov. 1849. They were pulled up the Mississippi by a steamship together with two other ships and arrived at New Orleans the 25th Nov. 1849. At the 27th Nov. he traveled with others on the steamship further via Cairo and then on the Ohio river to Louisville where he arrived the 6th of Dec. 1849. He found people there whom he knew from Germany and was warmly welcomed by them. He writes that he had worked as a farmhand in Germany and wanted to learn a profession.  His long letter contains his impressions during these first weeks in the USA where he saw slaves being sold on a marked and fruit that he had never seen before. Local currency was the Thaler which the people call ‘Dollar’ but German money (Gulden and Kreuzer) was also accepted everywhere.

Later he moved to South America where his trace is lost.

Jacob Bremser is named in the 1880 census as living in New York City, New York, USA. According to different sources he was born around 1822/23 in Preußen, Germany. He was a cigar maker and was married to Amelia Bremser (born abt. 1824); their children were Louis (born 1860) and Emma (born 1861) [source: familyseach.org]

Johann Heinrich (Henry) Adam Bremser, born 03 August 1826 in a water mill called ‘Jammertalsmühle’ near Niedertiefenbach, which is a ruin today, was the son of Philipp Jacob Bremser (ca. 1794 – 1832) from Allendorf and his wife Anna Eva Michel from Niedermeilingen. Philipp Jacobs father Johann Andreas Bremser (1759 – 1813) came from Niedertiefenbach and was the first member of the Bremser family that lived on the Jammertalsmühle*. He was a shepherd for most of his life. Still in 1808 he was a "shepherd". But when he died 5 years later in 1813 he was called "miller" on that mill.  This Johann Andreas was the great grandson of the Johann Justus Bremser (1672 – 1727) so Heinrich was related to the Philipp Heinrich Bremser, who immigrated in 1849 to the USA.

Heinrich came in 1853 to Ackerville, and later lived in Kewaskum, Wisconsin, where he has descendants living up to today. Still in Germany he married Philippina Schupp who was born in his home area.

His first son Charles Bremser Senior was born in Niedertiefenbach at 5 August 1851; the second son Henry Anton Bremser Junior was born in Ackerville the 23 October 1855; then three daughters were born: Johanna Eliza Bremser at 23 July 1858, Catharina at 14 June 1862 in Wayne, Washington, Wisconsin and Anna Rosa Philippina at 10 April 1863

Henry Bremser died at 9 March 1913 in Kewaskum, Washington, Wisconsin. His widow followed him at 7 January 1917 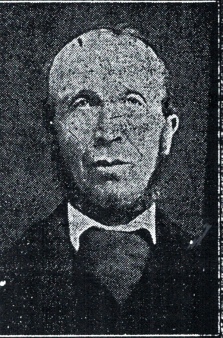 Henry Bremser (photo out of obituary 1913)

* The Jammertalsmühle was one of the poorer mills within the valley of the “Dörsbach” which in this area is called the “Jammertal” (misery valley). The mill burned down in 1854, was immediately rebuilt but already abandonned in 1885 when the last inhabitant left the mill. Source: community of Koerdorf

At this point I want to bear in mind Mrs. Nancy Carol Verhelst nee Kudek who helped me not only with her own Bremser ancestors in Ackerville and Kewaskum, Wisconsin, but also with the big family tree of the Bremser families in Niedertiefenbach, Rhineland-Palladium, Germany. I never had such extensive help again! 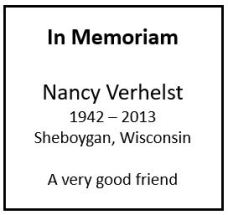 Johann Gottlieb Broemser was born 11 December 1817 in Mainz as son of Johann Baptist Broemser (1790 – 1840) and Maria Wilhelmina Goettig (1793 – 1844). At 20 August 1842 he married Maria Katharina Becker (1818 – 1896) after already 2 children were born to the couple. At 1853 they already had 7 living children. Johann Gottlieb Broemser was a cabinet maker. They were members of the Catholic church as were all of the Broemser family preceeding them. He came to the USA around 1853 and lived in Boston for a few years where his family joined him around 1854. The family had moved to St. Louis, Missouri by 1859 where their youngest child was born. He served in the Civil War as a captain in Company K, 41st Infantry Missouri Volonteers along with two of his sons. He was married in Mainz, Germany where his first two children were acknowledged on the same day as his marriage. He died at 11 Februar 1879 and was buried on Loutre Island, Missouri while visiting his son Martin. Maria Katharina was in Oregon at the time visiting one of their children who had sickness in the family.

Maria Katharina returned to St. Louis for a period of time. She was living there in 1880 with the six-year-old orphaned daughter of John Jacob. She was in Leadville, Colorado by 1885 where she lived with her daughter Wilhelmina´s family and granddaughter Dora. In 1890 she applied for a widow´s pension. She was living in Glendood Springs, Colorado in 1896 but as yet the place and date of her death are unknown. 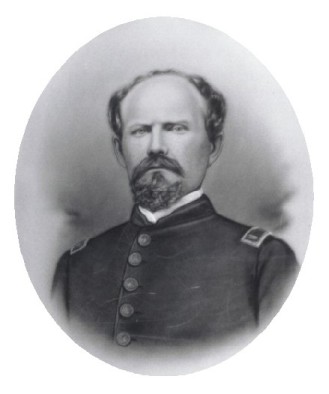 Johann Philipp Bremser was born at 21 June 1808 in Nastätten, Germany as the first son of Johann Henrich Bremser (born 1785) and his wife Antonette Regina Haiss (born 1787). Johann Philipp Bremser learned the profession of a shoemaker before he married Anna Margarethe Oberländer at 26 December 1834 in Nastätten. She was born there at 20 Nov 1811. The couple had 7 children of which 3 had already died when he emigrated (before) 1856 to settle for his family. The rest of the family including the 4 children emigrated at 1 September1856 from the State of Nassau.

Descendants are living in Utah

According to Anton´s grandson Edmund (Ned) Bremser, only German was spoken in the home of Anton and Minnie (Wilhelmina). The German area of town to the south was called Calf Town.

Descendants were or are living in Phoenix, Springfield and Kansas City, Missouri

There are descendants to the present, e. g. in San Francisco.

Christian Friedrich (Frederic) Bremser was born at 7 March 1859 in Schlangenbad, Hesse as a son of Philipp David Bremser (born 1807) and his wife Anna Elisabeth Häuser (born 1826); he immigrated to the USA before 19 August 1889 when he married Josephine Heil (ca. 1866 – 1964), daughter of Frank and Louise Heil. Her father owned 3 department stores in New York City according to a family tradition. Christian Frederic died in October 1937, his widow died 9 March 1964. Although the couple lived in Springfield, Hampden Co., Ma., both are buried in the Heil family grave in Brooklyn, New York, which is still existing (Josephine´s name is not mentioned on the grave stone) 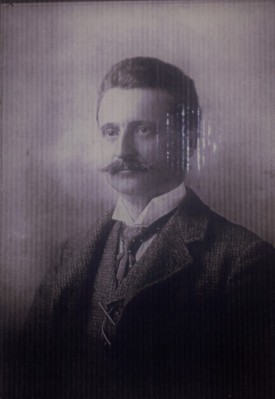 Philipp Heinrich (Henry) Gottlieb Elias Bremser, born 22 September 1864 in Grebenroth, State of Nassau, today part of the community of ‘Heidenrod’ in Hesse, Germany, as the son of Philipp Nicolaus Karl Bremser (1838 – 1900) and Marie Jacobine Weidenmüller (1841 – 1886). Philipp Nicolaus Karl was the great great great grandson of the above-mentioned Justus Bremser (1672 – 1727) so all these Bremsers were somehow related to each other. Heinrich Gottlieb married Katharina Philippina (‘Bina’) Klein the 27th of May 1888 in Burgschwalbach where she was born at 11 March 1863

Their first two children were born in Hahnstätten in 1888 and 1891, where the couple lived after their wedding. The other two children that survived where born in Norwalk, Huron, Ohio in 1893 and 1896. They all were daughters so there are descendants still living in the USA but no Bremsers.

“Henry Bremser, 84, whose name has been associated with the coal and building supply business here for more than a half-century, died at 5 a.m. this morning at his home 57 E. Elm following a lengthy illness.

Mr. Bremser, who founded the Bremser Coal & Supply company here, was born Sept. 22, 1864, in Nassau, Germany, and emigrated to this county with his wife and family in 1892 and made his home in Norwalk since.

A mason by trade, Mr. Bremser later later entered the contracting business and is attributed to being the first man in Huron county to engage in cement block manufacturing. In 1909 he purchased the Bell Coal company which he operated jointly with his mason and contracting business until his retirement in 1923. 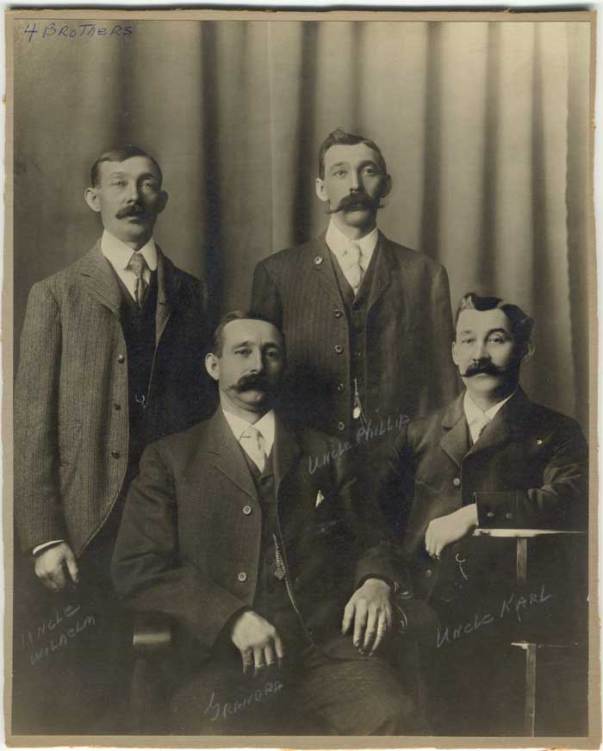 Karl Bremser II. was born at 26 May 1872 in Grebenroth, Rheingau-Taunus-Kreis, Hesse, Germany and was the brother of the above-mentioned Heinrich (Henry) Gottlieb Bremser. He came to the USA together with his brother in or shortly after 1892, married Emma Hay (1878 – 1956)

Philip worked in the masonry together with his brother Henry.

Adam Wilhelm Jacob Bremser was born 2 February 1867 in Grebenroth, Rheingau-Taunus-Kreis, Hesse, Germany as another brother of the above-mentioned Heinrich (Henry) Gottlieb Bremser. According to the 1920 US census he immigrated in 1908 with his wife Johanna and their one year old child Wilhelm Jr. to live in Norwalk, Ohio, where his two older brothers already lived (familysearch.org). Wilhelm helped his brothers to make cement blocks. He died 23 July 1929 in Cleveland Ohio.

Johan Georg Karl Eduard Bremser was born 30 August 1869 in Grebenroth, Rheingau-Taunus-Kreis, Hesse, Germany as another brother of the above-mentioned Heinrich (Henry) Gottlieb Bremser. Karl followed his brothers Henry and Phillip to the United States on April 12, 1910 but returned to Germany soon thereafter.